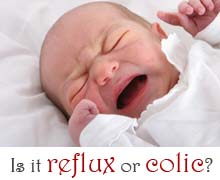 Reflux and colic are similar conditions that put babies in a lot of discomfort. So how do you tell them apart? More importantly, what can you do if your baby is affected? This guide will help you answer those questions.

Gastroesophageal Reflux Disease (GERD) in infants is different from acid reflux in adults. Infant reflux is simply frequent “spitting up”, which many babies do. It’s estimated that up to 35% of the 4 million babies born annually in the United States suffers at least mild reflux. If your baby spits up occasionally, it’s nothing to be concerned about. The symptoms of GERD tend to be more severe:

If your baby suffers any of the above symptoms, it may be reflux.

Baby colic (also called infantile colic) is a condition in which an otherwise healthy baby cries or appears stressed for long periods without any obvious cause. Typically, it manifests during the first month of life and continues until the baby is 3-4 months old, though rare cases have persisted up to a year. The medical criteria specify that babies with colic cry or fuss for at least three hours, at least three times a week, for the first three weeks of life. That being said, many doctors believe that a baby can have colic without quite meeting these symptoms, especially the 3-hour rule. A more general set of symptoms of baby colic include:

The late afternoon / early evening fussiness is common among babies, even those without colic. We asked our pediatrician about it, and even he was uncertain as to the reason. He did point out that the early evening is when babies (1) tend to get more tired, as they don’t sleep as well during the day, and (2) usually have gone a longer time without substantial feeding, which usually happens in the morning and at night. The confluence of these factors may explain why many babies are colicky at around 4 or 5 p.m.

Helping A Baby with Reflux

There’s lots you can do to deal with babies with mild reflux. The most important thing is to minimize the stress placed on your baby’s tummy. This means that you should avoid overfeeding and try to burp your baby at least twice during feedings. You should also keep your baby in a somewhat upright position for at least half an hour after he’s eaten. You can hold him, of course, or put him in a baby bouncer or Bumbo-type seat. Always put a burp cloth or towel on your shoulder when you’re holding the baby or burping him, as infants with reflux tend to spit up a lot.

Helping A Baby with Colic

The jury is still out on the cause of baby colic. While gas bubbles in the stomach or digestive tract have always been a popular theory, it is clear that the set of causes goes well beyond that. Worse, many of the standard treatments for digestive discomfort — simethicone, for example — seem to only offer temporary relief or none at all. Wikipedia recommends that babies with colic be treated instead with the five S’s:

You’ll notice that these are all baby soothing techniques, nothing more. Unfortunately, since the medical basis of colic remains understood, there are not many advanced treatment options. No matter what the experts say, I recommend that you try gas relief drops with simethicone (Mylicon) and gripe water to see if they make a difference for your baby.

The season of change is upon us, and with it are a number of factors that might affect your baby’s sleep habits. In the United States we have daylight savings changes, which move the clock forward in springtime and backward in fall. Gaining an extra hour this fall seems like a great idea, right? Until […]