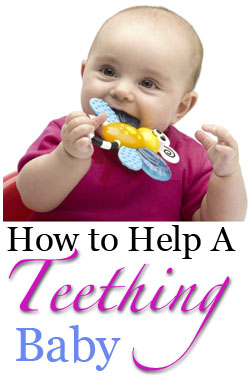 Let me guess: Your baby, somewhere between the age of 3 and 12 months, is fussing more than usual, waking up crying, and refusing to eat. That’s right, your baby is probably teething. You’re in for a bumpy ride for the next few days, but you’ve come to the right place.
Contents:
At What Age Do Babies Start Teething?
Teething Symptoms and Signs
Baby Teethers and Toys
Pain Relief for Teething Infants
Update: Frozen Waffles
Teething Necklaces for Mom
The Amber Teething Necklace

At What Age Do Babies Start Teething?

Generally, your baby will get his first tooth between the age of 3 to 7 months. There are exceptions, of course — some babies start at 1 month, or are born with a tooth, while some won’t begin until nine months. Usually the bottom middle two teeth are the first to come in, then the top two, and then they fill in on the sides. Most times, it’s one or two teeth at a time, which means that you can expect to repeat the process over and over again until your baby’s final set of teeth (second molars) start coming in by around 24 months. 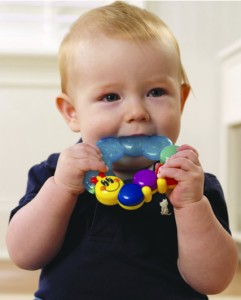 There are a set of common symptoms that most parents notice in a baby that’s teething:

Last of all, as a companion to or direct result of these symptoms, you’ll notice general fussiness in your baby when he’s teething. This is understandable, because he’s in pain, poorly rested, hungry, and doesn’t understand why this should be! So next, let’s walk through the various things you can do to offer your teething baby some relief.

The classic remedy for teething babies, the soft infant teether, now comes in a million shapes and sizes. The thinking behind these is that giving a baby something soft and yielding to chew on will soothe the discomfort of new teeth coming in.

There are plenty of teethers out there, so try a few. According to my research, the universally most popular one is the Sophie Giraffe Teether pictured at right.

Some of these can be placed in the refrigerator or freezer, after which the cold provides a sort of numbing effect, and let me tell you, this works. I was surprised to see that (1) my baby was willing to hold and touch something icy cold for several minutes, and (2) how well it seemed to quiet him down.

All play teethers aside, you’ll probably want to offer some pain relief to your teething infant, particularly at night. There are a few options for this. The most popular by far is a topical pain relief gel, such as Baby Orajel, which contains a mild anesthetic like lidocaine. I know this works, because I’ve put it on with a finger before, and then noticed that my fingertip goes numb. There are homeopathic alternatives to this (most with clove oil as the key ingredient) but the reviews of these suggest that they have a strong smell and/or taste, which makes it hard to apply to a squirming infant.

There are also gum massagers and baby toothbrushes, both of which can offer some relief by letting you massage your baby’s swollen gums a little bit. The toothbrush is nice when your baby’s getting his first teeth, because he gets to munch on your finger a little bit while you massage him. 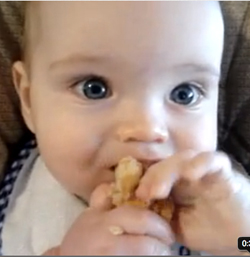 So I’m updating this article because was just went through a hellish week during which one of our twins was cutting an especially sensitive tooth. He’s 11 months; we usually give him baby cereal after dinner but before bedtime. With enough solid food in his belly, sleeps through the night just fine. The problem: the pain of teething was enough that he refused to eat solid food, even when clearly hungry. He did better with bottles, but only slightly. Between the hunger and the teething pains, he was quite the cranky baby and didn’t sleep well.

We took him to see the pediatrician to rule out a baby ear infection. Our doctor told us his gums were really swollen, and asked if we’d offered him some frozen waffles to chew on. We hadn’t, but it turned out to be one of the best ideas ever. You can buy them at the grocery store, or make your own and freeze them. Frozen waffles work wonders, because:

Frozen waffles seemed to help comfort his gums during the day. At night, we did Orajel and dose of baby pain reliever. Success! I can’t tell you how wonderful it was to have him sleeping through the night again!

Teething Necklaces and Bracelets for Mom

Stylish teething necklaces for the mom whose infant grabs at her neck, jewelry, or hair are all the rage right now. I wish I had thought of this, because these necklaces have several advantages:

The Pink Cupcake Teething Necklace (shown at left) is one of the most popular of these, though they come in a variety of styles, colors, and designs.

Chewbeads makes a teething necklace and a teething bracelet for moms, both stylish and made of 100% silicone (the same material used in most pacifiers) for on-the-go chewing.

Finally, another thing you can try to help a teething (or fussy) baby is an amber necklace. These are usually made from Baltic amber, harvested in the largest known deposit of amber near the Baltic sea in Europe. The necklace is worn (but not chewed) by your baby, so you’ll have to make your own decision regarding its safety.

This is a homeopathic remedy thousands of years old; to my knowledge, there’s no scientific evidence that amber necklaces (1) release succinic acid when worn by an infant, or (2) have any physiological effect. But many parents swear by the soothing effect of amber necklaces. For less than $20, if you’re desperate, this may be something to try. Leave us a comment if you’ve used an amber necklace, and tell us how it went!

Summer time brings about a lot of challenges for new parents. The heat, the longer daylight hours, the noise around the neighborhood – all kinds of things that can disrupt a baby’s normal sleep schedule. Plus, there are barbecues and birthday parties and all kinds of activities that will have you realizing just how much […]