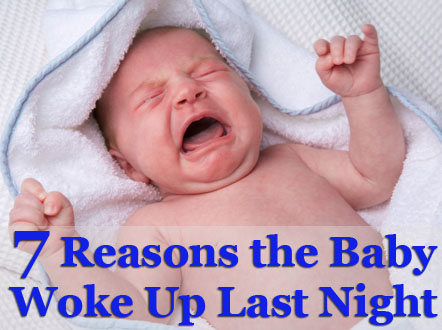 It’s exasperating when an older baby, one that’s capable of sleeping through the night, wakes up in the middle of it. Especially after you’ve done the baby sleep training successfully. Something has gone terribly wrong!

I’ve been through this with all three of my kids, and I’m here to help. When one of them suddenly began waking up in the middle of the night, we didn’t always know the cause. With a little bit of trial and error, we found that late night wake ups usually stem from one of the following issues:

#1. The Baby Woke Up Hungry

For us, this was the #1 cause of late-night wake ups. As most of my readers know, I’m a big believer in the correlation between nighttime feeding and sleep. A hungry baby isn’t hard to spot: he or she usually won’t settle down without a bottle. When our oldest son was about 11 or 12 months, he started waking up at 5 a.m. consistently to eat. We’d give him a bottle, and he’d go back to sleep. Not bad, right?

The only problem: it trained his body to keep that schedule. Our outstanding pediatrician recommended a couple of weeks of sleep training, in which we slowly weaned him from that bottle. Doing this really seemed to help. We’ve also tried to be vigilant to make sure he eats a good dinner, even offering a bowl of baby cereal half an hour before bed.

#2. The Baby is Teething

Teething wreaks all kinds of havoc on otherwise great-sleeping babies. It often makes them unwilling to eat, drink a bottle, or keep a pacifier. And it just plain hurts! Some babies seem to handle it better than others. One of our boys seemed to sleep right through his teeth coming in; the other was just miserable. There are lots of remedies for a teething baby, but nothing works perfectly every time.

If you know your baby is teething, you’ve probably found the sleep problem. Try whatever you can to soothe those swollen gums during the day, and do your best to tough it out. Once those teeth are in, the problem goes away.

Another common sense problem is that of diapers. In daytime, we might do a diaper change every 4 hours or so. How exactly does that work for a 12 hour sleep stretch at night? In my experience, a wet diaper may not wake a baby up, but a dirty one often does. There’s not much you can do about the latter. But to minimize the impact of wet diapers overnight, we do two things.

Without a doubt, this diapering strategy helps our babies sleep for longer.

Babies, just like grownups, tend to settle into a sleep schedule after the newborn stage. For most infants, it’s 2-3 naps during the day and a longer stretch at night. Setting and maintaining this schedule is a cornerstone of sleep training. It doesn’t have to be a strict by-the-minute schedule. Some readers don’t like when I use that word, sending angry comments or e-mails reminding me that babies aren’t robots.

What I mean by “schedule” is simply this: Be consistent. On most days, your baby should have roughly the same number of naps, the same napping hours, and the same early bedtime. Getting off of that schedule can cause problems. For example, letting the last nap of the afternoon go an hour longer tends to make the baby less drowsy come bedtime. Keeping the baby up too late often causes them to wake up earlier (counter-intuitive but true, just ask around). Maintaining a consistent daily/nightly routine will help avoid some of these issues.

We’ve occasionally had baby wake-ups that are from discomfort other than a diaper change. Sometimes it’s temperature: the baby’s either too warm or too cold. Or he or she got a leg stuck in the bars of the crib. Or the pacifier was lost. You can’t always prevent these problems, but you can take steps to ensure your baby is comfortable even if the temperature fluctuates. Put your baby in some comfortable pajamas at bedtime. There are plenty of adorable pajamas and sleeper sets.

A swaddle or sleep sack can provide some extra warmth and restrict movement. And we love, love, love the light and airy Aden & Anais blankets.  Especially in summertime.

Do you ever hear your baby fuss or cry out, and go in to find him or her fully asleep? We’ve seen this enough to become convinced that they’re bad dreams. What bad things could babies possibly dream about? I have no idea. Empty milk bottles, perhaps. But if they’ve invented a way to prevent nightmares in babies (or adults), I don’t know about it.

The good news is that the baby often goes right back to sleep on his own. If not, I can usually offer a favorite pacifier and a little comfort, and that’s all it takes. REM sleep, when most dreams occur, tends to make a baby drowsy. If they’re wide awake, it probably wasn’t just a bad dream (more likely teething, gas, or some other physical problem). For more help, see 12 ways to make a baby sleep.

#7. Something External Woke the Baby

This scenario might not be the most likely, but it caused some baby wake-ups for us in the past. Something external was waking them up at night or early in the morning. In one example, it was the trash men (garbage collectors), who thought it a brilliant idea to come by in their noisy truck while it’s still dark outside. This was in spite of our complaints. Neighbors coming home late, barking dogs, and early-morning machinery (like lawnmowers) all have conspired to wake our sleeping babies. One time, after a week of consistent wake-ups at around the same time, we realized that the alarm on a toy digital watch was going off every morning at around 5:20 a.m. We combat this by using a soother or sound machine to provide some white noise. And with the occasional angry letter.

The most intrusive and consistent external cause of early-morning wake ups is 93 million miles away. I’m talking about the sun. Unless we have the room-darkening shade and curtains just right, even a sliver of bright morning sunshine will wake our boys at the crack of dawn. This is especially intrusive in the fall and winter, when sunrise comes extra-early due to daylight savings. It’s brutal. We have to make a habit of checking all of the window treatments each and every night, or else brace ourselves for a very early morning.

There you have it! Tackle these seven potential problems, and you’ll maximize your baby’s chances of sleeping through the night. If your baby’s waking up is unusual (he or she had been sleeping well), check out our article on handling baby sleep setbacks. 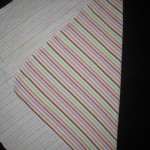 Swaddling a newborn baby is an essential skill for new parents. A swaddled infant will stay warmer, safer, and more comfortable in bed. Thus, it should help them sleep longer. Translation: more sleep for you. Here we’ll discuss some of the reasons for why you should swaddle your baby, how to swaddle a newborn, and […]