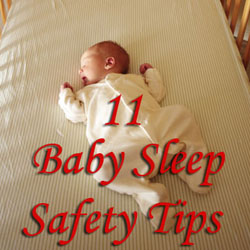 Back To Sleep is a public education campaign started in 1994 to combat the incidence of Sudden Infant Death Syndrome (SIDS). The central recommendation, the one for which the campaign was named, was that babies be put on their backs to sleep (not their stomach or side). This has been proven to reduce the risk of SIDS. Since the campaign began, SIDS death rates have dropped by 50% (see figure).

In late 2011, the American Academy of Pediatrics (AAP) released updated guidelines for promoting safe sleep for babies. These are recommendations made by pediatricians to reduce the risk of SIDS. Though their list is extensive (and backed up with a lot of research), I’ve boiled it down to the essential baby sleep safety tips. 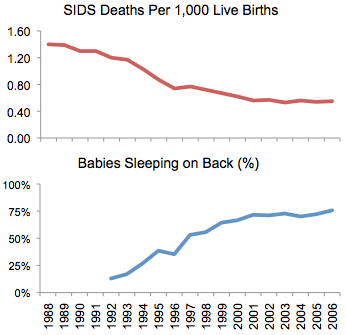 Effect of the Back To Sleep Campaign

Infants should be placed in a “supine” position — completely on their backs — to sleep. This should be done every time the baby goes to bed (including naps) and continued until 1 year of age.

Some parents worry that doing so increases the risk of choking, but this is not the case. Babies have protective airway mechanisms to prevent this. Even with babies that have reflux should be put on their backs to sleep.

Use a firm [flat] sleep surface

Ideally, a firm mattress covered by a fitted sheet. The AAP recommends that a crib conforming to ASTM safety standards be used. Check to make sure that your crib or mattress hasn’t been recalled. The mattress should be sized to fit your baby’s crib (see our list of the best baby crib mattresses). Importantly, don’t put your baby in a crib with missing parts, and don’t try to fix a broken crib yourself.

Also, make sure the crib or bassinet is placed in a safe location, away from electrical cords, mini-blind cords, etc. (see our article on 5 dangers near your baby’s crib). Sitting devices, such as car seats, strollers, and swings, are not recommended for routine sleep. This is especially important for babies younger than 4 months of age, as partially-upright positions might cause their airway to become obstructed.

Sleep in the same room, but not the same bed, as your baby

Under no circumstances should your baby sleep in bed with you. Doing so exploses them to lots of suffocation and strangulation hazards, including pillows, loose blankets, sheets, and the bodies of the parents. This is a real danger. Also, it’s recommended that the mini crib or bassinet be put in the parents’ room near their bed so that they can monitor and comfort the baby overnight. There are now baby monitors that detect sound and movement to help you monitor your infant when you’re out of the room.

Keep soft objects and loose bedding out of the crib

Your baby’s bed should have three things in it: a mattress, a fitted sheet, and the baby. No pillows, no soft cushy toys, no sheepskins, no loose bedding of any kind. It’s OK to swaddle or put him in a baby sleep sack, but loose blankets are not recommended. Crib bumpers and bumper pads should not be used. These increase the risk of suffocation, entrapment, and strangulation. Don’t worry that your baby will injure himself on the bars of the crib – he won’t. Throw those bumpers away.

Your infant should be dressed appropriately for the environment, with no more than 1 layer of clothing on than an adult would wear comfortably. Check your baby for signs of overheating — perspiration or feeling hot to the touch — and address them immediately, even if the baby’s asleep. See also our guide to what a newborn should sleep in.

Do not use home breathing/heart rate monitors

This one surprised me. The AAP recommends against using home cardiorespiratory monitors, the kind that detect apnea (pauses in breathing while sleeping), brachycardia (heart rate drops) and/or blood hemoglobin oxygenation. There is no evidence that these decrease the incidence of SIDS.  While there may be some values for certain infants (preemies?), monitors should not be used routinely.

I did not see any specific recommendations against using a baby movement monitor like the Snuza Halo. See our review article for some good options.

According to the AAP, there is “substantial evidence” that women who have prenatal care are less likely to have a baby that dies from SIDS.

Avoid smoke exposure during pregnancy and after birth

Smoking should absolutely be avoided by the mother, during pregnancy and after birth. Also, you should minimize your baby’s exposure to smoke from other people, including relatives and friends. Smoke lingers in hair and clothing; people who smoke should generally not be near (and certainly not holding) your baby. Also, smoking combined with co-sleeping creates a high risk for SIDS.

It’s just selfish to smoke around a baby.

Avoid alcohol and illicit drug use during pregnancy and after birth

Alcohol taken during pregnancy endangers a fetus. You should know this already. After birth, alcohol should be avoided because it impairs your judgment and dexterity, which could prevent you from caring for your infant. Alcohol and/or drug use in combination with co-sleeping creates a particularly high risk for SIDS.

My question to the AAP: shouldn’t illicit drug use be avoided at ALL times? 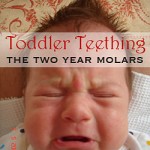 Our boys have been good sleepers since about five months of age, when the baby sleep training techniques we employed finally paid off. Suddenly just before their 2nd birthday, they started waking up at night, crying and near-inconsolable. Strangely, they both refused a pacifier. This is odd because they love their pacifiers — probably sensing that they’re […]