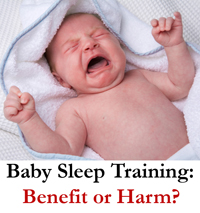 Establishing healthy sleep habits for your baby has many potential benefits, the most immediate of which is more sleep for the both of you at night. No one’s disputing the idea that a baby sleeping through the night (at the appropriate age) is a good thing. It’s just that getting there can be emotionally taxing on both the baby and the parents.

Some parents worry that baby sleep training techniques — especially those where some crying may be involved — might have emotional or physical consequences on the baby, the parents, or their relationship. Most of these concerns originated with pure extinction methods, better known as cry-it-out (CIO). This method “is not usually recommended nowadays because of the distress it causes parents and infants.”

However, the concerns were extended even to current best practices for baby sleep training.

The focus of the debate seems to be the possibility of long-term harms from baby sleep training, but less attention has been paid to the potential long-term benefits it offers. It’s quite possible that there are benefits to both maternal and child health that may extend well beyond the 3-year follow-up.

Now the benefits and harms of baby sleep training have been evaluated in a scientific setting. A new study in the top journal Pediatrics performed a randomized research trial to evaluate the long-term benefits, and possible harm, of baby sleep training intervention. The background information on the study is both sobering:

The good news is that most infant sleep problems, as the authors put it, “are readily treatable.” For babies 6 months of age and older, proven sleep training techniques such as controlled comforting help infants learn to self-soothe and to sleep independently. From 2003 to 2005, Hiscock and colleagues conducted the Infant Sleep Study, an effort to improve infant sleep problems at age 8-10 months. It was a large, community-based trial emphasizing positive bedtime routines and one of two baby sleep training techniques:

The results of the study were compelling: parents who did intervention reported fewer sleep problems at age 10 months, and the mothers were less likely to have suffered depression at 2 years. In other words, sleep training was clearly effective in both establishing healthy sleep habits and preserving mom’s mental health.

As a follow-up to their study, the authors went back in 2009 when the infants were 6 years of age. They looked to see if there was evidence of intervention versus control group families in:

Among the 265 families that participated, there were no significant differences in any category between the intervention group and the control group. In other words, behavioral sleep techniques had no long-term effects on children or their parents.
So parents and health professionals can confidently use baby sleep training intervention to address infant sleep problems. In fact, the authors note that “Teaching parents to regulate their children’s sleep behavior is a form of limit setting that, combined with parental warmth, constitutes the optimal, authoritative parenting style for child outcomes.”

Many parents are eager to begin feeding their babies cereal. Often, they try to give it before the baby is ready, with disappointing results. In this article, we talk about when your baby is ready to try cereal, how to introduce it, and which baby cereals are best. Contents: When To Give A Baby Cereal […]